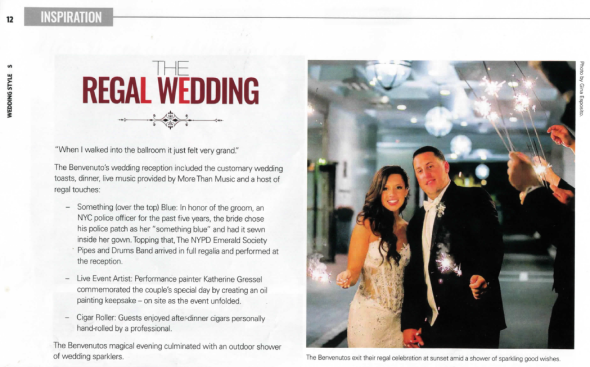 Hi Colleen. I want to thank you and your staff, particularly you, Kevin, and Alex. Your hard work paid off!   It was truly an amazing party. Alexa’s entrance will be talked about for years to come. The thought and your efforts that went into it really showed. Everything you came up with was fantastic. Never saw so many people on a dance floor for that long at any other party. Kevin saved the day during the candle-lighting with his quick thinking and his energy was off the charts.  Music-perfect!  Best wishes, luck, and good health to you and your family.

Posted by morethanmusicny  |  January 11, 2017 | Categories: Carlyle On The Green, Weddings | Leave a comment

Will call you this week but wanted to thank you so much for an AMaZING party! Gennady was AWESOME, the dancers were incredible, Elaine was fabulous and all of your staff was excellent. Truly the best!!! Thank you, thank you, thank you!!

To a person, every guest raved about the music and the lights! Who, other than Marcus, would think “Gloria” would bring people ONTO the dance floor rather than clear it! That’s the genius in it what you do. When I heard that playing, I was going to head for the stairs and then I saw people rushing on. Too funny.

The timing of every phase was perfect, the lights were perfect, Kevin was ON, and the dancers were on fire.

Even the ZACHARY on the building was awesome. I was told that the light beams looked like a fountain on the way out b/c it was raining so hard.

And behind the scenes Colleen “The Conductor”, you were great. How many people did you have in the kid’s room!?!? It was awesome. You coordinated the pipe band flawlessly who really don’t like to take orders from anyone and you handed that speech to me right when and where I needed it. The games were ZZ over the top! The guests don’t know what you do behind this all but we do!

I personally heard great things about what I was most worried about, the pipe band, the Windy song and the Eliyahu candle lighting. I heard some cried during Windy and the candle lighting. Can’t ask for more . lol

Happy Thanksgiving!  Just wanted to reach out to say how grateful we are for the AMAZING job that DJ Jonathan Ofri and Genadi did at our son Jonathan’s bar mitzvah this past Sunday, November 20th, at Shelter Rock Jewish Center.

Jonathan Ofri was great to work with.  He helped us plan out the songs and the order of the party.  He met with us in person to talk everything through and also gave us excellent ideas and his opinions when we asked. He answered any questions we had and replied to emails promptly.  His music was perfect.  We had so many friends tell us they loved the songs he played.  It was really special for us.

Genadi got the crowd going just right.  He made everyone feel great at the party.  He did a terrific job with our family entrances and introductions for speeches.  He did great with the games for the kids and the giveaways.  He was the perfect MC for our party.

The dancers Sam and Alicia were awesome as well.  They danced with the kids and the adults and made sure everyone stayed on the floor to their moves. Our son Jonathan danced on the stage with the More Than Music dancers, and we commented that he danced like he was one of them and could work for you guys in the future.  Our son’s friends were dancing and it was so great to see everyone enjoying themselves.

The energy your team brought to our party was unforgettable.  People are still talking about how much fun they had.

I wanted to write you to thank you for all your help in putting together a fabulous party for Danielle. Rico was great. He’s such a warm, fun-loving person and he’s the best dance! He energized the party in the perfect way and was completely accommodating to every request. He was a great, great asset as were the dancers, all of whom were really polite and professional and so much fun to dance with. They really helped make the party!

Thanks so very much.

More Than Music Blog
Create a free website or blog at WordPress.com.